Murray McGibbon is one of South Africa's most prominent theatre personalities and a multi-award-winning director and producer. He is the recipient of the South African Airways Young Artist’s Award and the American Biographical Association Distinguished Young Leadership Award. The US Government awarded him a Fulbright scholarship in 1983, which enabled him to undertake his graduate studies in the USA.

Murray McGibbon has won South Africa's highest theatrical award, the NALEDI (formerly the VITA), six times and is internationally recognized as a dynamic and innovative director, equally at home with the classics, contemporary drama, musicals and theatre for young audiences. For six years he served as Artistic Director of Drama for the Playhouse Company in Durban, South Africa, where he directed 40 productions and produced 122. His work has been performed before three reigning monarchs: Queen Elizabeth II, King Goodwill Zwelethini and King Sobusa III.

His publications include Theatre in the 21st Century, a journey backwards into the future; The Playhouse Cookbook and acting editions of Hamlet, Romeo and Juliet, A Midsummer Night's Dream, The Tempest, King Lear and Speech Training for You!, the fourth edition of Elizabeth Sneddon's text, which he edited and revised for American students. He is currently working on a revised fifth edition to be published in 2017.

Since joining the faculty at Indiana University in 1996, Professor McGibbon has directed King Lear, Noises Off, M. Butterfly, When the Rain Stops Falling, The Three Musketeers, Hay Fever, Blood Brothers, The Tempest, Hamlet, Jimmy Cory, The Woman in Black, Honour, Greater Tuna, Master Harold….and the ‘boys’, The Foreigner, Romeo and Juliet, Cole, 'Art', I Love You, You're Perfect, Now Change, Scapino!, Equus, A Midsummer Night's Dream, Nunsense - The Second Coming, The Servant of Two Masters, The Oblong Man, The Fantasticks, A Piece of My Heart, All in the Timing, Nunsense, and Kindertransport.

Professor McGibbon is the recipient of a Teaching Excellence Recognition Award from Indiana University as well as a 2016 Provost’s Award for Undergraduate Creative Activity and Research. Students have nominated him more than ten times as the best professor on the Bloomington campus, through the campus-wide Student Choice Award. Many of his former students are enjoying successful careers on Broadway, the West End of London and in theatres and universities all over the world. He is currently working on New Directions - A Collection of Post-Apartheid South African Drama.

In 2005, he re-directed his VITA Award winning Frank&Stein in South Africa, while Black Mamba starring Ben Voss and John Van De Ruit played for nearly six years on the African sub-continent. Black Mamba won a 2007 NALEDI Award for Best Production of a Revue, in addition to Cape Town’s Fleur du Cap Award, a Fool’s Award, a Durban Theatre Foundation Award for Best Production and enjoyed runs at both the Edinburgh Festival and the New Wimbledon Theatre in London, England in 2008.

In 2007, he directed The Tempest in Pietermaritzburg, South Africa featuring a cast of IU and the University of KwaZulu/Natal students, garnering seven Durban Fools Award nominations. After being awarded a New Frontiers grant, he restaged the production in Bloomington in May 2009. In 2011 he was awarded a grant by Indiana University to develop a study abroad program for theatre students to travel to ancient Greek theatre sites followed by three weeks studying theatre in London and Stratford-upon-Avon.

In summer 2015, he directed The Merry Wives of Windsor for New York City based Hip-to-Hip Theatre Company. He was nominated by the Queen's Ledger for best director and best production.

Professor McGibbon recently directed an original pronunciation (OP) production of King Lear, sponsored by a New Frontiers Grant, his third major New Frontiers Grant in less than ten years. This was the first time King Lear has been staged in the original pronunciation since 1606. The production featured departmental students and international guest artist, Graham Hopkins, in the lead role.

He is the occasional radio host of Profiles for WFIU, and the voice of NPR's Downton Abbey advertisements. 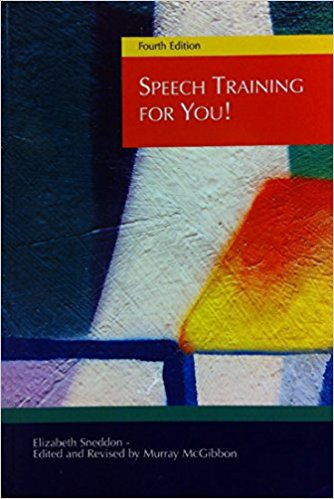 Speech Training for You!

The Goat, or Who is Sylvia? (Notes toward a definition of tragedy)

Peter and the Starcatcher

My Children! My Africa!