Decolonizing Dance Education in Higher Education: One Credit at a Time 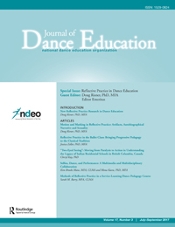 Most dance departments in the United States require rigorous study of traditional Western dance forms. This is common; many developed countries cultivate the art forms that reflect the aesthetics and philosophies of the majority culture in that nation. However, demographics in the United States have changed greatly over the past 50 years, with people of color now reproducing at higher rates than whites (U.S. Census 2013). Yet, even with this shift in population, the focus of dance departments in the United States remains Western-based. Kerr-Berry (2012, 48) noted the difficulty in diversifying dance curriculum in higher education in her article, "Dance Education in an Era of Racial Backlash." In another article, "Progress and Complacency: A 'Post-Racial' Dance in Higher Education," Kerr-Berry (2010) pointed to the multicultural and multifaceted dance outside of higher education. She stated, "[s]ystematically, leadership in dance in academia is being 'whitewashed"--increasingly underrepresenting the American dancing body" (3). Kerr-Berry's point is evident in the curriculum structures of many dance departments that require a smaller number of courses for dance forms outside modern and ballet. This author argues that departments should embrace a more inclusive system that does not privilege particular dance forms. For the purpose of this article, she chose to focus on the intent of dance departments regarding the issue of cultural diversity. The author used mission statements as an entry point to understand each department's agenda. The intent to provide a diverse educational experience for students is evident in these mission statements and many others throughout the country. Cultural diversity in dance education cannot truly be valued in this country without reshaping our infrastructure. Students deserve the opportunity to study, perform, and teach diverse dance forms with the legitimacy of higher education degrees.