Politics as Usual? Theatre, the Northern Irish Assembly, and the Romanticization of Normality 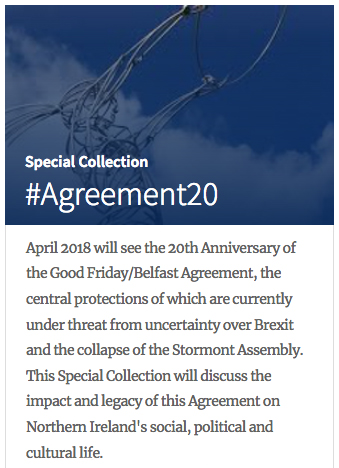 This article explores the treatment of Northern Irish electoral politics in two plays featuring Members of the Legislative Assembly (MLAs) as major characters. Between 2007 and 2016, many viewed the stability of the Northern Irish Assembly as evidence of the continued success of the peace process. Although the principle of mandatory coalition at the system’s heart bears witness to the lasting nature of divisions within the state, the collaboration between once-bitter enemies demonstrates a real shift in Northern Irish politics. Until the institution’s (perhaps temporary) collapse in 2017, many commentators and politicians suggested that its success proved that the state was progressing in the nebulous but desirable direction of ‘normality’. Colin Bell’s God’s Country (2010) and Rosemary Jenkinson’s Planet Belfast (2013) suggest, however, that a valorization of normality obscures the dangers posed to Northern Ireland by problems that occur on more global levels. God’s Country explores the dangerous impact of homophobia in the North, and particularly within unionist politics, while Planet Belfast depicts the combined threat of environmental destruction and corporate interference. Both plays depict Northern Irish politics functioning smoothly, with minimal evidence of sectarian divisions deeper than the partisanship present in most democracies. In spite of this, however, they caution against treating normality as an end goal or as evidence that the state is safe. Instead, they suggest that the state faces a wide array of problems that have been obscured by the focus on sectarianism and the legacy of the Troubles.

Owicki, E., (2018). Politics as Usual? Theatre, the Northern Irish Assembly, and the Romanticization of Normality. Open Library of Humanities. 4(1), p.9.